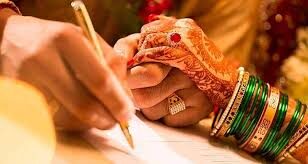 Before marriage registration, all the rituals of marriage are performed in the temple by taking seven rounds in front of the fire in the presence of Pandit ji with full customs in the temple, thus the marriage is solemnized.

If the couple is Muslim, then Muslim rituals are organized for Muslim couples, marriage is done by the Maulvi, in this way the marriage is performed according to Muslim customs.

If you want to register for Arya Samaj Marriage together then its charges Rs.5500

If you want to do Arya Samaj Marriage and immediate registration together, then its charge is Rs.8000 (One Person Should be a resident Of Ghaziabad)

If you want to do a general court marriage, then this court marriage is done under the Special Marriage Act 1954, for this, first, you have to give an application to the office of the Deputy District Officer or Divisional Magistrate, with which all the necessary documents are also to be attached. If the application is accepted, then 30 days time is given from the day of acceptance. You can also call it the waiting period. This waiting period is given because at this time other proceedings are taken by the court which is as follows. After accepting the application, the notice of marriage is published on the notice board of the Tehsil and the notice board of the Office of the Registrar of Marriages the information of marriage is also published in the national newspaper.

The publication of the information is done so that if the relatives or relatives of both the boy and the girl have any objection regarding such marriage, then he can raise that objection. So 30 days time is taken. If no objection is raised, the date of marriage is fixed and on the appointed date the marriage is solemnized in the presence of a Deputy District Officer or Sub-Divisional Magistrate and a certificate of marriage is issued. So by this process, ordinary court marriage can be done. But due to the lengthy process, there are very few people who like to do court marriage in this way, whereas apart from this people prefer to do marriage registration or instant court marriage.